L-Theanine and Its Physiological Impact on the Brain 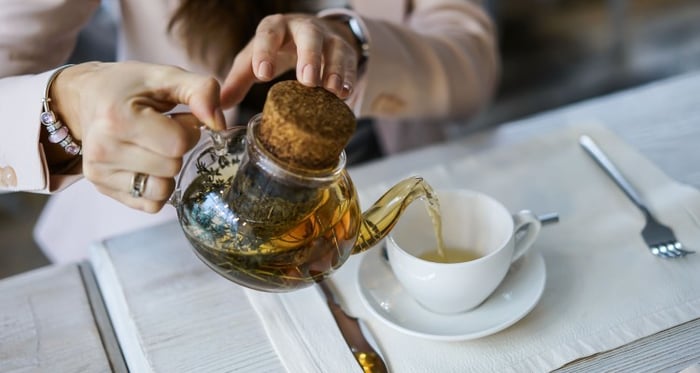 Tea is consumed globally as a relaxing daily drink and as an aid for better health. People consume it in every form imaginable, from powder to extracts in dietary supplements, and it helps us unwind after a stressful day. But what's the secret behind tea's calming effects?

Teas are a rich source of flavonoid antioxidants, and they also contain a unique amino acid known as L-theanine, which clinical studies show to have the ability to enhance brain function, reduce stress, and relieve anxiousness. When you experience stress, your nervous system starts producing more hormones that increase blood pressure and physical tension. L-theanine works by relaxing the body and the brain in times of stress, helping to maintain a normal heart rate and blood pressure while providing positive health benefits.*

L-theanine is commonly found in green tea leaves and mushrooms, though in lower levels. It is known for its distinctive, savory taste – you may have heard the culinary term: umami. Similar in structure to the amino acids glutamine and glutamate, which assist in the regulation of the nervous system, many believe that L-theanine is responsible for green tea’s relaxing effects. It can also affect the levels and functions of neurotransmitters in the brain.1

There has been extensive research on green tea and L-theanine due to its health benefits, which include positive effects on learning, immune-enhancement, vascular relaxation, and brain health.* It can help maintain a normal inflammatory response and create a relaxing effect in the brain, which may reduce the symptoms of stress and improve cognitive function in older adults.*2-4

Neurotransmitters are chemical messengers in the body that transmit signals from nerve cells to target cells. The brain needs these neurotransmitters to regulate vital functions like heart rate, mood, and concentration.5

It's not uncommon to feel frustrated or nervous when you’re under a lot of stress, but high levels of stress may change your brain in ways that affect your mental health, cardiovascular health, and overall wellness.

RELATED CONTENT:REVITALIZE YOUR BRAIN: WHAT TO EAT FOR OPTIMAL COGNITIVE HEALTH

L-Theanine and the Brain

Feelings of anxiousness is one of the most common issues in the U.S. L-theanine can help promote calmness, alertness, and brain function in anxious individuals, and it has been studied for its ability to relieve physical and mental stress, improve cognition, and boost mood.*7 Importantly, L-theanine promotes relaxation without causing any common side effects, such as drowsiness.*

When you’re feeling stressed or anxious, a cup of green tea can do your body – and mind – wonders.* The L-theanine found in green tea is a great natural alternative to calming yourself in times of stress.* And without having to worry about experiencing any side effects, you’ll feel just fine about pouring yourself another cup.